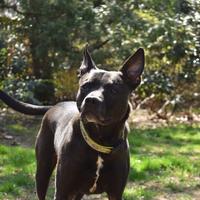 The first official staff member of Snyder Strategies, she worked for treats and had a taste for expensive shoes, just like Kate.

Most important trait-- eternal optimism. Squirrels are elusive, but she never stops trying.

The second official staff member of Snyder Strategies, he provided much needed relief to Nessie.

Duties include patroling the backyard and keeping the house safe from the mail carrier and all deliveries.

​Kate Snyder has over two decades of electoral and issue campaign management experience. Her focus has been on developing smarter coalition strategies, creating effective messages and directing campaign communications designed to shift the debate on key issues at both the national and state level. She also has helped organizations analyze the landscape in which they work and assess the effectiveness and impact of their campaigns.

Kate has lead long-term collaborations with organizations where she provided analysis and guidance on existing and ongoing economic message research and identified opportunities for the applications of the research to various situations.  Audiences for the tools and strategies developed and deployed include 501 (c)(3) and 501 (c)(4) partners at the national and state level, House and Senate leadership and state legislators.  Kate also advises on state campaigns and helps guide state research, messaging and communications strategy as states look to build forward thinking progressive agendas.

With deep experience in working with individual organizations and coalitions in moving issue campaigns at the state and federal level,  her work has included a collaboration with the National Education Association team to lift up the voice of members in their social justice work as well as political and issue campaigns.  She directed state communications efforts for the Unity group, which sought to pass an aggressive issue agenda during President Obama’s first term. She also collaborated with the Service Employees International Union Healthcare Division for three and a half years, developing both an internal program and external message strategy for nurse members as they fought to pass and defend the Affordable Care Act.  She has also worked with Communications Workers of America to develop a series of campaigns over the course of three years to reposition the union on the hill and in the progressive community.

She has conducted state landscape analysis looking at both the political and communications dynamics within states for the Ballot Initiative Strategy Center, State Voices, the Wyss Foundation, Open Society Foundation and the Ms. Foundation for Women.

Committed to developing campaign professionals, Kate serves as a trainer for Wellstone, now re:power.  She received a B.A. from the University of Maryland, College Park and a M.S. from the London School of Economics. Kate, her husband Seth, their son and two rescue dogs, live in Washington, DC.